Conductivity is a measure of how well a solution conducts electricity. To carry a current a solution must contain charged particles, or ions. Most conductivity measurements are made in aqueous solutions, and the ions responsible for the conductivity come from electrolytes dissolved in the water. Salts (like sodium chloride and magnesium sulfate), acids (like hydrochloric acid and acetic acid), and bases (like sodium hydroxide and ammonia) are all electrolytes. Although water itself is not an electrolyte, it does have
a very small conductivity, implying that at least some ions are present. The ions are hydrogen and hydroxide, and they originate from the dissociation of molecular water. 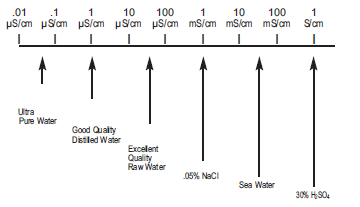 Not all aqueous solutions have conductivity. Solutions of non-electrolytes, for example sugar or alcohol, have no conductivity because neither sugar nor alcohol contains ions nor do they produce ions when dissolved in water.